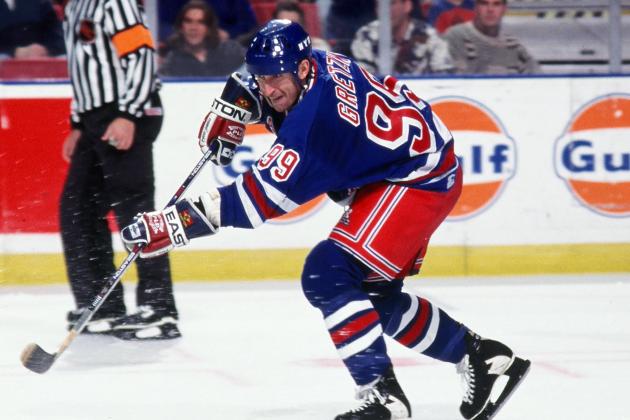 This blog is about a highly successful entrepreneur who started on an unlikely playing field but always took the shot. His name is Brandon Steiner, and Richard Sandomir calls him  “The Man Who Spins Pinstripes Into Gold” in his September 2014 New York Times article , a piece that inspired this blog.

We are telling Steiner’s story to drive home this point: male or female, rich or poor, you can take the entrepreneurial shot too.

In Brandon Steiner’s book, “You Gotta Have Balls,” the subtitle reads, “How a Kid from Brooklyn Started from Scratch, Bought Yankee Stadium and Created a Sports Empire.” It makes you want to know how he did it.

Albeit Of Humble Beginnings…

Brandon Steiner didn’t enter this world with a silver spoon and red carpet pathway to success.

Raised in Flatbush, Brooklyn, New York, by a single mother, his family sometimes resorted to claiming food stamps when his mom’s beauty parlor didn’t provide enough earnings. By his own admission, Steiner said he was “extremely poor. I had no money.” At age 10 he went door-to-door to local businesses and secured his first job at a local food store. At age 13, he started delivering newspapers and learned the importance of a value proposition when he distinguished himself by offering to buy milk and bagels on Wednesdays and Sundays for one woman who preferred to get her own paper instead of allowing him to deliver it.  She turned out to be a key customer who referred him new customers and grew his business. He went from delivering 29 Daily newspapers to 199. Without realizing it, he was honing a distinctive competence in customer service!

So how did a poor kid from Brooklyn end up with Steiner Sports, a 45,000 square-foot warehouse of memorabilia in New York that generates approximately $50 million in annual revenue from sales and was sold to Omnicom in 2000 for $30 million? How did this boy of meager beginnings end up as an entrepreneur and make it so big that by 2009 he was able to venture into an $11.5 million deal with the city of New York for the rights to demolish the old Yankee Stadium so he could extract, repackage, and sell nostalgic collectibles from 85 years and 6,581 regular season Yankee home games?

It appears that Brandon Steiner gave a hearty welcome to opportunity when it knocked, and when it did, he took the shot.

After he went to John Dewey High School in Coney Island and graduated from Syracuse University with an Accounting Degree, Steiner continued to develop his distinctive competence in the business-to-consumer industry long before he had a shot at the big plays in his career.

He started in the food service and hospitality business at a hospital cafeteria in Baltimore, and then worked at the Hyatt in the same city. In the late 1980’s he moved back to New York and managed the Hard Rock Cafe in New York City and then the Sporting Club, the city’s first full-service sports bar. Both those venues introduced him to high profile sports figures. Brandon said that his paper-boy experience at age 13 taught him to always look for something new and different and ask the question, “What’s missing?” This disposition is a defining mark of his career, and it gave him the idea of hiring professional athletes as guest bartenders at the Sporting Club. Steiner was sharpening his distinctive competence in the service industry and getting to know the key players in sports at the same time. Opportunity sprouted out of his day-to-day diligence. 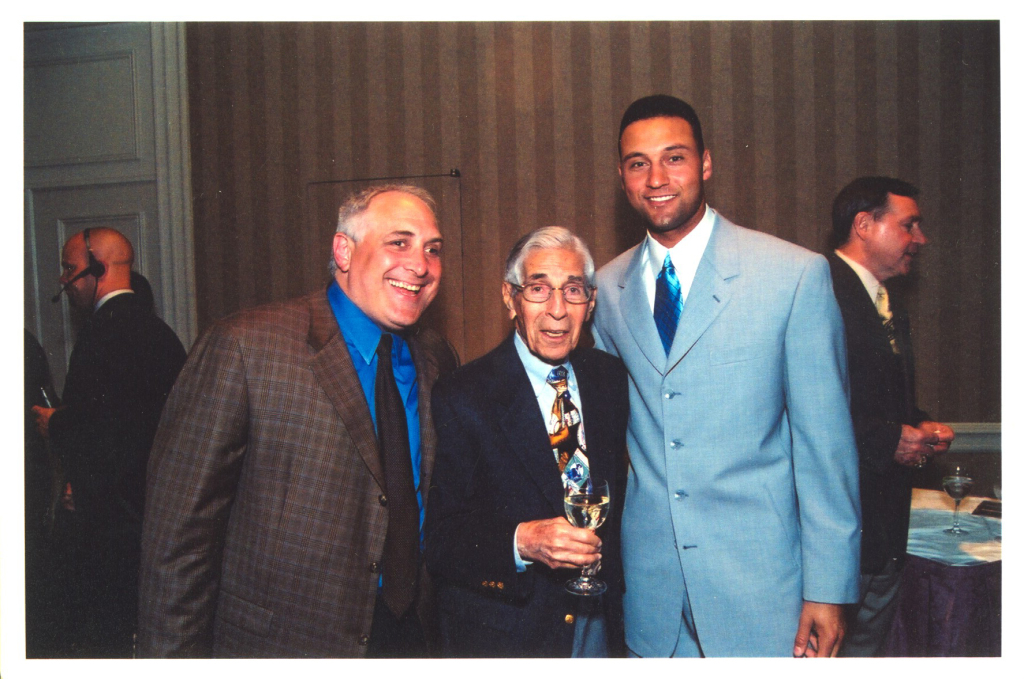 Brandon Steiner, left, with Phil Rizzuto, one of Brandon’s first clients, and the man who told Brandon to pursue Derek Jeter, right, when Jeter was first starting out!

A Bankable Business and Credibility with Potential Customers

Steiner’s success with the Sporting Club earned him notice by athletic figures such as, Mickey Mantle and Lawrence Taylor. While capitalizing on those connections and enlisting them to make appearances at the Sporting Club, he realized that bringing value to businesses by matching them with sports figures had become a bankable business. In the habit of asking himself, “What’s missing?” he also saw a void in the market, because athletes didn’t have anyone to represent them for speaking engagements and corporate appearances. They were potential customers with whom Steiner had already established credibility He saw an opportunity to disrupt the market with something new. He opened the door and took the shot.

With $4,000, a small office, and one intern, Steiner bootstrapped his sports marketing company, Steiner Associates, in New Rochelle, New York. He set up speaking engagements and other appearances for professional athletes and later rode the tide of rising popularity for the memorabilia industry, and changed his business name to Steiner Sports. 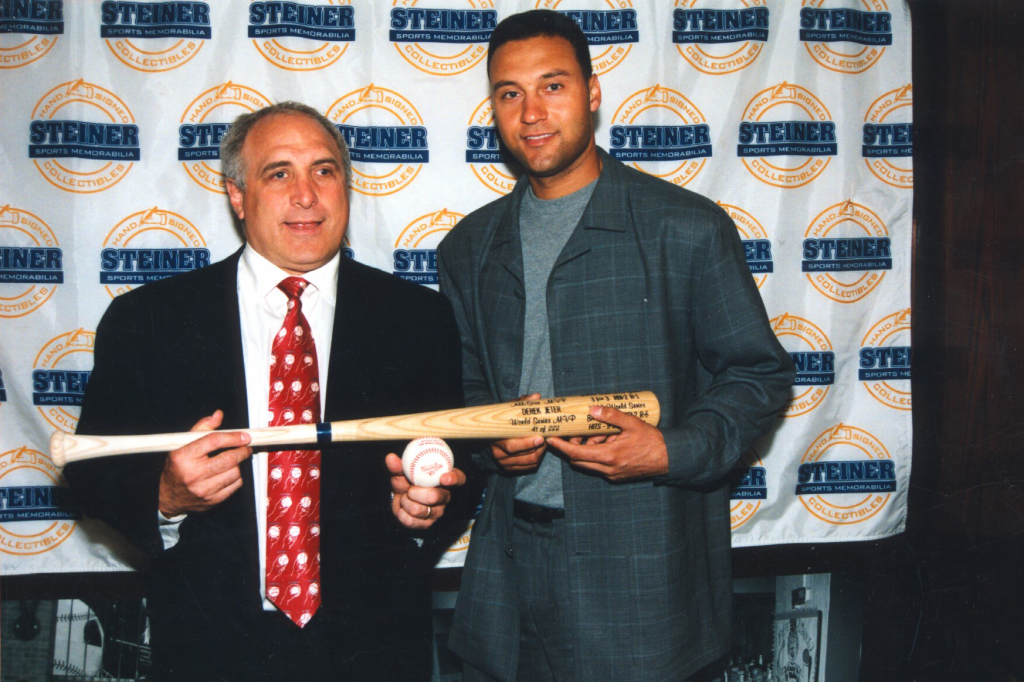 Wyn had the opportunity to visit Steiner Sports headquarters, tour the warehouse, and hear Steiner speak several years ago with her local Wharton Alumni Group. Here’s what she says about meeting the entrepreneur: “Steiner’s enthusiasm for his business and for sports was infectious. We were in awe as we walked through the warehouse and saw skateboards signed by Tony Hawk, used Yankees uniforms, and signed baseballs and bats. It was also clear to us that Steiner cares about the fans – especially kids – because he is a fan himself. He has combined his passion with his distinctive competence.” 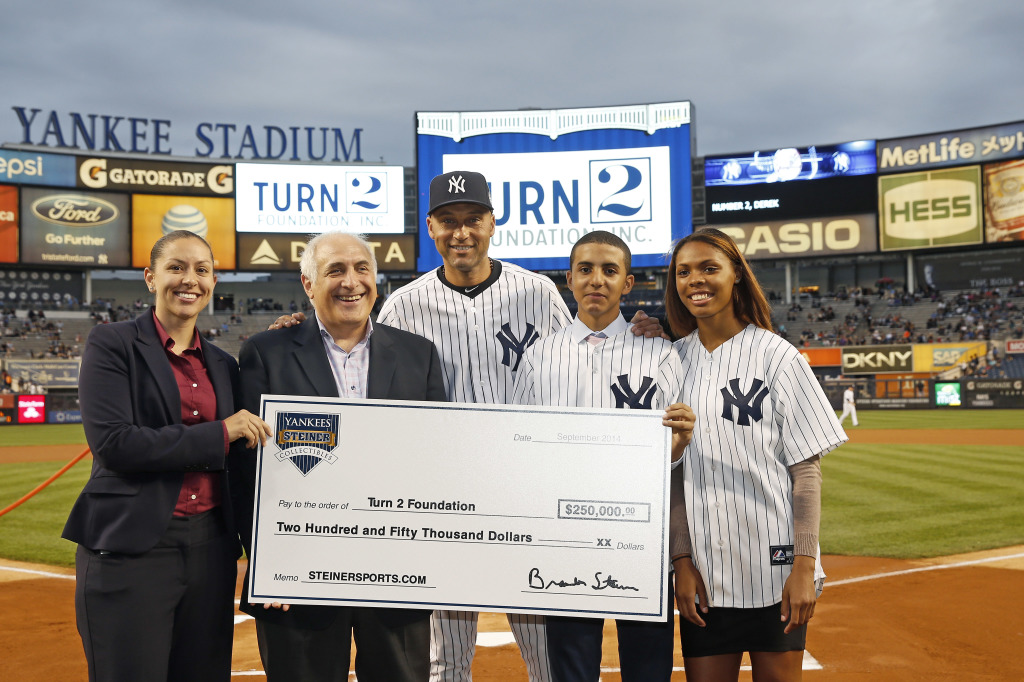 Steiner Sports Giving Others a Chance: Turn 2 Foundation creates and supports signature programs and activities that motivate young people to turn away from drugs and alcohol and “TURN 2” healthy lifestyles.

Brandon Steiner wasn’t born with a silver spoon in his mouth, but he was a diligent opportunist. As you move one step at a time through life, develop your distinctive competence, get to know the key players in your field, and look for a bankable business model. (To read Brandon Steiner’s blog, click here. To sign up, type your email address in the box on the left hand side of the page and follow the instructions.)

Everything you do, every decision you make can set you in motion so that you are ready to take the shot when opportunity knocks!

Share your comments below. We welcome you into the conversation.