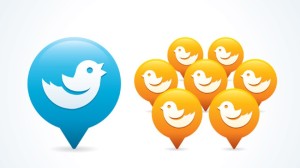 The model of consumer feedback has changed drastically with the appearance of social media. In fact, the very mechanisms corporations use to gather feedback – and their  failure to address customers’ real needs – have driven consumers to their 140-character soapboxes on Twitter and also on Facebook. Look at any package, and you’ll likely find an invitation to call a toll-free number, visit a website, or even “follow us on Facebook.” Indeed, this exhortation to call or write has been part of packaging for as long as I can remember. Someone years ago* had the brilliant idea that feedback from consumers would be good for both companies and consumers. However, the abundance of people taking up the offer has given rise to the growth of some of the most frustrating industries: automated phone response trees and call centers, with customer service representatives reading off scripts. The “help lines” have become so byzantine that it sometimes feels like companies are trying to hide behind them. This can feel doubly true when a company has something negative happening in the public eye, such as a recall, when concerned consumers have even greater reason to get in touch.

Even before social media, irate consumers were not shy about making their opinions known. Remember the reformulation of Coca-Cola? The company quickly restored the original formula after consumers complained and cast their dollar votes against new Coke.

When I (Wyn) was a freshly minted MBA (pre-Internet) and an assistant product manager on Alpha-Bits children’s cereal, the brand was deluged with letters from angry parents and kids after the General Foods changed the formulation and taste from plain oat to a fruity flavor. As the low-person on the team, I got to read every letter and write a report to brief management on the consumer rants. I also got to track our weekly sales as they plummeted. After a flurry of meetings, the company quickly restored original Alpha-Bits to the shelves of grocery stores.

That experience taught me that it always pays to make your voice heard as a consumer in any medium that will work. Today, that can range from picking up the phone to using Twitter. The Alpha-Bits episode also showed me that companies need to understand and listen to their customers. Customers are the final arbiters on whether or not your company or brand will survive.

The importance of social media in two-way communications with customers has been brought home in the past few weeks with GM’s recent recall of 1.6 million cars. GM’s phone lines, websites, and customer service representatives were swamped. The storm of concerned customers was so impenetrable that after an hour fighting through conventional avenues, one woman turned to Twitter to vent her frustration. Her brief message in a bottle yielded tremendous results: GM funded the cost of her car’s trip off her Alaskan island to the dealer where it needed to go for the recall repair. GM threw in a rental car while she awaited the repair.

As the New York Times captured in their article, “GM Uses Social Media to Manage Customers and Its Reputation” about the event:

G.M.’s dual approach — going about its normal business while trying to help specific customers — reflects the tightrope the company must walk on social media like Facebook and Twitter, where a customer’s perceptions of a brand are shaped by both what the company does and what other people say about it.

How will new companies accommodate this new, very public form of interaction? Every company is going to have to master coexisting in a world with Facebook and Twitter, where “Likes” can spell victory or defeat. Small startups that are using social media to get their message out also need to learn how to take messages in. Reputation hangs in the balance, and a badly handled misstep now may be the end of a promising enterprise.  Even more importantly, startups that are trying to learn if their customers like their product can elicit feedback via social media, learning enough to make an early pivot that can be a game saver.

For those of you in the throes of dynamic planning, now is the time to consider this new relationship. Feedback and customer service need to be built into your plan. How will you incorporate social  dialogue into your marketing plans? How will you respond to customers? For those of you already up and running, what is your policy? How is it working out for you?

If the worst were to happen, how would you weather a very public storm?

*Full disclosure: I couldn’t track down the exact date feedback media appeared on a package in the US