While Jake Burton is often credited with inventing snowboarding, it really started decades before he started his company in 1977. Jake did do a lot of legwork in talking ski areas into allowing snowboarding and in helping to popularize the new sport  by claiming that “snow surfing will be the most fun you’ve ever had on snow.”

Like many new ideas, the snowboard had a lot of fathers. Snowboarding has been a sport that has depended on many inventors who figured out a better way to slide or surf down a snowy slope. 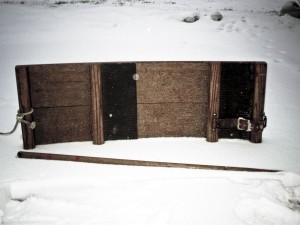 Wikipedia says that Vern Wicklund built the very first snowboard in 1939 when he was only 13. He called it a “Sno-Surf,” and it was similar to a sled. He and relatives patented the Bunker 22 years later and formed the Bunker Company. The original prototypes are on view at the Colorado Ski & Snowboard Museum.

Most people agree, however, that Sherman Poppen created the board that is most like what people ride today. In 1965, he created the Snurfer as a Christmas gift for his daughter. Unlike today’s snowboard, it had no bindings. But Poppen’s daughter’s friends wanted one, too. Soon, Poppen licensed his idea to a manufacturer and sold over 500,000 Snurfers. Still, it was only a toy for kids.

Enter Dimitrije Molovich, who made snowboards in the late 1960s after sliding down hills on cafeteria trays at college. He started a company called Winterstick. News articles started to get people using his innovation to “snowboard.”

Tom Sims, whose obituary says he was an early inventor of the snowboard, built a “ski board” out of wood in his shop class at school because he wanted to be able to skateboard all year long. He later improved his invention. But Sims wasn’t the only person credited with inventing an early snowboard.

Jake Burton was the first person to put a binding on a snowboard. Riding it in a competition, he showed the world how his innovation made a difference in control.

Why all this history?  Just to show you that ingenuity, innovation, invention come from many sources. Our country seems to nurture such people. We produce incredible innovation that changes the world. Our innovators are not just in the tech world.

Here is a series of people who helped introduced a whole new sport and industry that in the 2012-13 season had sales of $3. billion (SIA RetailTRAK). Without them, snowboarding would not be part of the Winter Olympic games. Our country seems to be really good at producing people who invent, innovate, and start businesses that spawn industries. These people change the world.